Free shipping on all orders over $80*

Children's multivitamin with delicious vanilla-berry flavour and no added sugar. Read More
Always read the label. Follow the directions for use. If symptoms persist, worsen or change unexpectedly, talk to your health professional. Vitamins and minerals can only be of assistance if the dietary vitamin and mineral intake is inadequate. 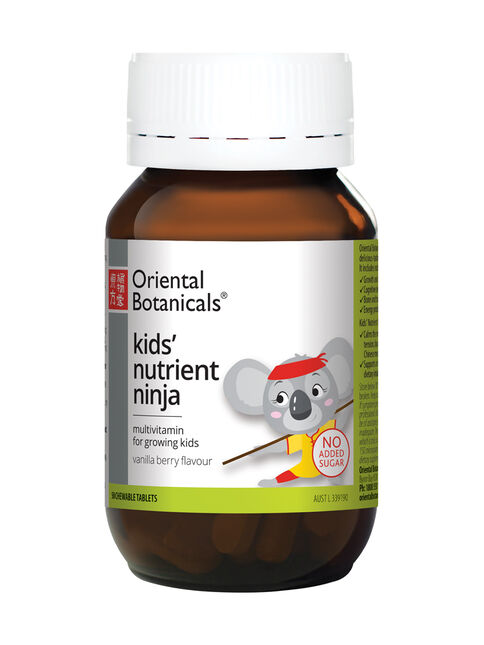 Kids' Nutrient Ninja
Children's multivitamin with delicious vanilla-berry flavour and no added sugar.
Always read the label. Follow the directions for use. If symptoms persist, worsen or change unexpectedly, talk to your health professional. Vitamins and minerals can only be of assistance if the dietary vitamin and mineral intake is inadequate.

Kids’ Nutrient Ninja is a great-tasting multivitamin for growing kids.

Kids’ Nutrient Ninja is a great-tasting multivitamin for growing kids.

Busy, growing children need a healthy, nutritious diet based on plenty of fresh produce to provide them with the fuel and nutrients they need. Support your child’s nutritional intake of key vitamins and minerals with Oriental Botanicals Kids’ Nutrient Ninja, a delicious-tasting multivitamin specially formulated for growing kids.

Iodine supports children’s normal growth and development, but unfortunately is sometimes present in only low levels in our food as the soil in some parts of Australia is iodine-deficient*.

The best dietary sources are foods from the sea – think fish, shellfish, seaweed and sea salt (although kids should only consume salt in very small quantities). It’s also added to commercially produced bread.

If your child doesn’t consume these foods on a regular basis, taking a multivitamin may help to support their nutritional intake.

Selenium is another trace mineral that supports kids’ development and growth, so is a valuable inclusion in a children’s multivitamin formula.

Unless they’re vegan, your child’s diet contains iron in two different forms: haem iron, from animal-based foods like meat and eggs, and non-haem iron from vegetarian sources like leafy green vegetables. Of these, haem iron is the more readily absorbed and utilised.

Oriental Botanicals Kids’ Nutrient Ninja contains iron as ferrous fumarate, which is more readily absorbed than some other types of iron (such as iron sulfate).

Vitamins for healthy bones and teeth

Vitamins A, D3 and K2 maintain healthy bone development in 2 to 12 year olds, and are also involved in the growth of healthy teeth.

For example, vitamin K2 supports the mineralisation of the teeth, which is the process in which minerals like calcium are incorporated into their structure to make them strong and hard.

Does your child have all the energy they need to get them through a busy day? Whether they’re at home, kindy or school, their cells are producing lots of energy to keep them going! The B-group vitamins B1, B2, B3, B6 and B12 support children’s energy production as well as their healthy growth and development.

Zinc is found in a wide variety of foods, but like iron, is more readily absorbed from animal foods such as meat, eggs and seafood than it is from plant-based foods like legumes, grains, nuts and seeds.

The herb ziziphus is also known by the names red date and jujube. It has a long history of traditional use in Chinese medicine for relieving children’s nervous tension and helping to keep them mentally calm.

In Chinese medicine, ziziphus is also traditionally used to relieve loss of appetite by nourishing the spleen.

Or as professionally prescribed. Take with food.

Sweetened with monk fruit and xylitol. Naturally coloured with beetroot.

If symptoms persist, talk to your health professional. Vitamins and minerals can only be of assistance if dietary intake is inadequate.

This product contains selenium which is toxic in high doses. A daily dose of 150 micrograms for adults of selenium from dietary supplements should not be exceeded.