$30.95 - $45.95
With dong quai, traditionally used in Chinese medicine to improve hair health by acting as a blood tonic. Read More
Always read the label and follow the directions for use. 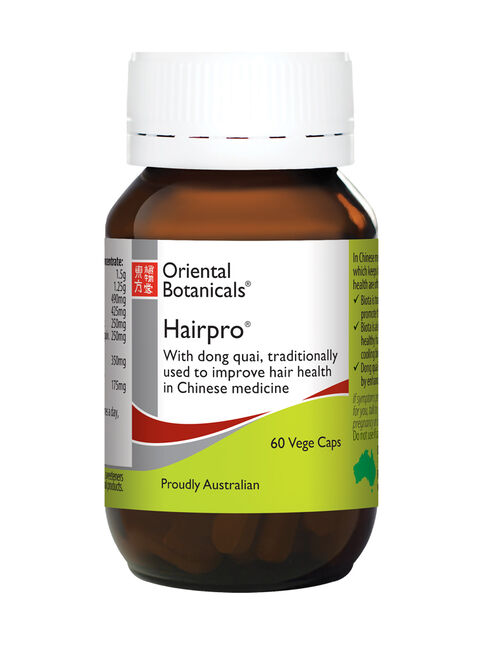 Hairpro
With dong quai, traditionally used in Chinese medicine to improve hair health by acting as a blood tonic.
Always read the label and follow the directions for use.

In TCM, the blood is traditionally seen as providing nourishment to the hair, and therefore the health of the blood is believed to play a key role in the hair’s health and appearance.

In contrast, having too much heat in the blood is often regarded as contributing to poor hair condition, hair loss, thinning of the hair and scalp irritation in TCM.

Biota is also taken to help expel blood heat in TCM, and consequently to support the health of the hair follicles and to relieve an irritated scalp.

Dong quai is traditionally used to improve hair health and consequently hair condition in TCM, where it’s believed to work by acting as a blood tonic.

Dong quai is also traditionally taken to invigorate the blood and promote its healthy circulation in TCM.

Give your hair the nutrients it needs too

Oriental Botanicals Hairpro is suitable for use alongside Hair Skin Nails Excel which contains a range of nutrients to support hair health.

If symptoms persist or if you are unsure if this medicine is right for you, talk to your health professional. Do not use during pregnancy or breastfeeding.